Lifeforms on the planet Shian-shenka

All life on Shian-shenka reproduces by cloning; there is no sexual re-combination. Even the flowers that produced pollen do not produce seeds. It is the pollen itself that grows into new plants. The same applies to the spores produced by fungi. Genes are altered by one mechanism only: every three thousand years or so the blue sun develops great sun storms that send radioactive particles streaming through the cosmos. In a wave lasting perhaps fifty years, thousands of mutations arise on Shian-shenka. The next thousand years are spent sorting and sifting. Inappropriate mutations, the might-have-beens, are consigned to genetic oblivion. There follow two thousand years of stability, only the fairly constant volcanic activity causing local chaos. The life-forms, old and new that have found a footing, thrive and increased in numbers, but remain unchanged through the ages, until the next period of chaos.

Most of the life forms of Shian-shenka, at least on the Home Island live inland, in the crater swamps. The vegetation on the outer cliff edges and faces is mostly of a fungal, algal and moss-like nature. These fixed life forms appear to have developed a family of chemicals similar in their photosynthetic abilities to chlorophyll, which, together with a great many carotenoids and other such pigments, cause a stunning variety of colours.

There are no predators on Shian-shenka, neither in the waters nor in the air nor on the land. The life-base of higher life forms is the spores of lower life-forms.

In the ocean shallows there are seaweeds and in the depths huge creatures reminiscent of jelly fish, but also, in ocean caves there are rich ecosystems that the zhongzi only discover in later books. Also in later books the zhongzi discover lifeforms that tolerate high temperatures and live in the mouths of heat vents and above volcanoes.

Mobile Life Forms that played a role in the development of the Zhongzi: 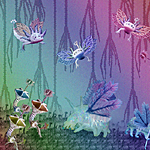 Flower flitters are found everywhere on the planet, but in the Crater they have developed more colours and forms than elsewhere, and were the cause of many a Lulong clone missing a geyser and ending his life on the crater bottom, as he delayed to study these beautiful creatures.

Wobblers: Winged but ungainly, the wobblers, with their jelly-like bodies, seem almost to waddle through the air in their endless quest from ledge to ledge for the purple felix fungi. This only grows on the ocean side of crater rims, and is the staple of the wobbler diet. Although they can ingest other fungi they do so only in dire need. Like all Shian-shenkan life forms, they breed by cloning, the tips of their tails shedding to become the little eggs that develop into new wobblers. They have the useful ability to form appendages as they need them, rather like an amoeba, but are limited by the need to be immersed in water at least once a day. Snuffling, bumbling, and trumpet-nosed, the wobblers are strange creatures, but they become the mainstay of the Cave Culture. Used as beasts of burden, they gave the Cave Dwellers freedom to move through the air in any direction. They themselves are . 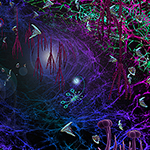 Golden Weavers: The tiny weavers of Shian-shenka, floating through the air on four small air bladders, create their golden nets in tunnel mouths and cracks wherever wind currents bear the heavy pollen that is their food. They are the first living things the Cave Dwellers learn to control. The Cave colonists work out how to make them weave threads on order. The threads are then used by the colonists to move around in their tunnels, and also as building material for other devices. 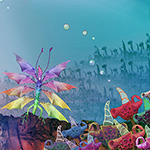 Nodders: Tall and thin, they stand on the cliff shelves and ledges at sunset, bobbing to each other, and waving their limbs as they sift the air through their silvery nets. They live off the dust, mostly pollen, that they catch in their nets. Their nets are an integral part of a nodders body, stretching from the torso to the flexible limbs. The nets were harvested by the Cave Colonists for use in the wind machines. Therefore, nodders were captured by the Cave Colonists, and eventually bred in the depths of the caves.

Fixed Life-forms that played a role in the development of the Zhongzi:

Fumarolas: The fumarolas are multicoloured tube-like growths, that reproduce by producing enormous volumes of pollen-like spores.
These tiny grains are actually complete seeds in themselves  like all other life on Shian-shenka, the fumarolas reproduce by cloning. Although the fumarolas grow only in the Crater, the clouds of spores spread everywhere on the island. All life on Shian-shenka is, directly or indirectly, dependent on the anemones and their prolific spore production. The Zhongzi called the golden clouds of spores as they twisted through the atmosphere, tracing the air currents, the golden helixes, and used them to climb through the air while waiting for a geyser to blow.

The lumini: The lumini are club-like bioflorescent growths that bathed many of the darkest caves and caverns in a soft rainbow of colours.